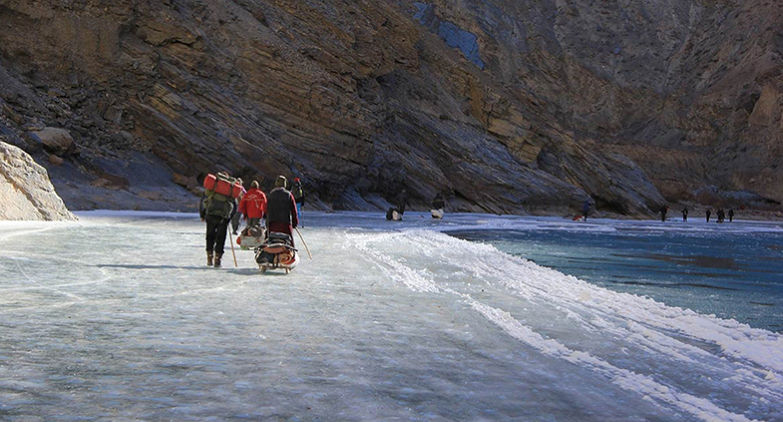 Tosh is located at an altitude of about 2,400m (7,874 ft) in the Parvati Valley, near Kasol in the Himalayan state of Himachal Pradesh. The Kasol to Tosh distance of 20 km is easily traversed by a short trek about an hour and a half long. It is becoming an increasingly popular tourist spot, situated along the Tosh River. Tosh, believed to be a land blessed by Lord Shiva, is dwarfed by the intimidating mountains surrounding it and is located at the heart of the Parvati Hydel Project in Himachal Pradesh. This splendid trekking opportunity is marked as an easy grade trek, which maintains a gentle incline and decline throughout! The Tosh village is considered to be one of the most charming trekking destinations in India.

The sight of the snow-capped mountains, rising in the distance, and the cold air hitting your face are a stark reminder of the fact that you are no longer in the city. This peaceful trek takes you through the forests near Tosh, to the roaring Tosh Waterfall, where you can relax by the cool, clear water as you soak your feet. The Tosh weather can vary greatly depending upon the season. Winters in the Tosh village see snowfall from early in the season, while the summers maintain a cool, pleasant temperature. The trek should ideally be avoided during the monsoons as the path can get slippery and dangerous. The temperature of Tosh during the winters can go down to around -8 degrees Celsius, and the temperature in the summer season stays around 25 degrees Celsius. The Tosh Trek is gaining popularity to such an extent in India and the rest of the world, that people have started referring to the Parvati Valley as the Tosh Valley. Though Tosh is a small hamlet it can easily be explored by walking around. Also, try the lip-smacking Israeli cuisine and European delicacies. One should not miss a hot cup of tea and maggie at high altitudes with great vistas.  If you are looking for a weekend getaway from your everyday life, nothing gets better than this. From its easy commute from Delhi, and awesome approachability Tosh Trek becomes one of the best weekend getaways from Delhi.

You can stay either in tents and experience nature in its best form, or you can enjoy the warmth of a homestay at a native’s house in one of the best places to stay in Tosh.  Be prepared for campfires and sleeping bags! For your upcoming vacations, make the best of your time with this experience of the best of nature!

Posted on September 27, 2018 Author Hannah Lapine
If your inner travel bug is telling you it’s time for your next trip you should be considering a fabulous Central European destination. Nestled in the heart of the where...
Tour and Travels

Why Nainital is the best place to visit in summer

Posted on April 28, 2021April 28, 2021 Author Shivam Bhatt
Uttarakhand is a famous tourist place of India. There are many beautiful places where you can visit with your family or friends. Nainital, Mussorie, Corbett and many places are famous...

What is a mannequin doll? This seems to be a simple question. But do you know other uses of artificial models? Today, we will introduce different types of dummies and their functions. After reading this article, you can have a more comprehensive understanding of this product, so as to better decide which type of product […]

Swift and reliable services for property management and sale in Liverpool

Posted on August 5, 2021August 5, 2021 Author Community First Real Estate Comments Off on Swift and reliable services for property management and sale in Liverpool