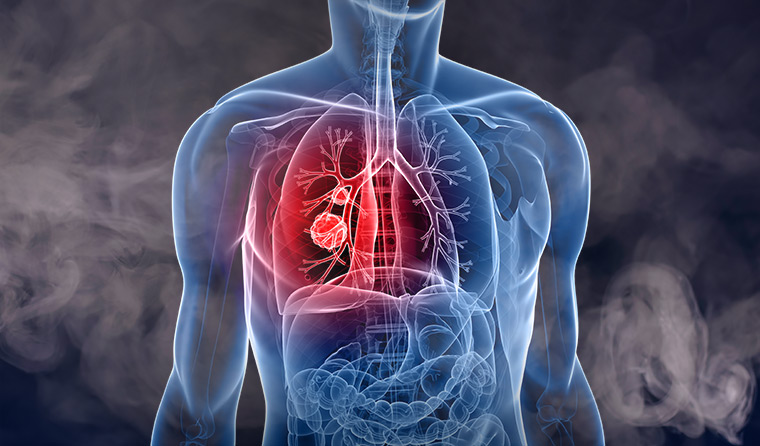 Lung cancer is one of the leading cause of cancer related mortality in the world, with about
2.21 million cases in a year. Lung cancer can be cured with some effective treatment with
early diagnosis. However, many don’t visit the doctor when they abnormal or persistent
symptoms leading to late diagnosis. The early signs of lung cancer might be typical such as
persistent cough, shortness of breath, or coughing up blood, or less common such as back
pain, shoulder pain, or even knee pain. The symptoms also differ based on whether the
affected person is male or female, a chain smoker or non-smoker, and based on age.
Awareness of the symptoms among people are essential for early screening and effective
treatment. This article rounds up the lung cancer symptoms according to lung cancer
treatment hospitals in India which people shouldn’t ignore.
Persistent cough or changes in the cough
A persistent cough is the most common symptom indicating lung cancer. More than 50
percent of people express the symptoms at the time of diagnosis. The cough can either be dry
or wet. Cough may happen at any time of the day. A lot of people don’t take persistent cough
into account and dismiss thinking it 0to be due to allergies, dry air in the winter. Smokers
think, cough is due to smoking and doesn’t pay attention to the signs.
The change in cough can also be an indicator of lung cancer. Chronic cough is mostly a
symptom of a condition such as GERD, asthma, or hay fever. But when the nature of chronic
cough changes from dry to coughing up blood and mucous it is time to consult a doctor.
Ignoring these symptoms might result in huge problems later on.
Shortness of breath or changes in breathing activity
Shortness of breath is also a possible lung cancer symptom. If the tumor in the lung blocks
the airway, changes in breath may occur. Build-up fluid tumor also results in shortness of
breath. If a person feels to go out of breath after climbing stairs or easy tasks, it shouldn’t be
ignored. When the blockage increases or the airways get inflamed, the lungs may produce
wheezing or whistling while breathing. Wheezing can also be a common symptom of lung
cancer. On sudden breathing problems or wheezing take it to the attention of the doctor
without any delay.
Repeated infection
A lot of people discover that they have lung cancer after treating repeated episodes of
infections such as bronchitis or pneumonia. If a tumor forms near the airway, the airway gets
obstructed and predisposes the affected to these infections. If a person has recurrent episodes
of chest infection it is better to consult the doctor and get a chest CT.
Coughing up blood

Coughing up blood, also known as hemoptysis, is also a common symptom of lung cancer.
One in five lung cancer patients experience this symptom and in some, it is the first symptom.
The symptom may sound dramatic, but many people notice only a small amount of blood-
tinged sputum.
Shoulder and arm pain
Shoulder and arm pain is the common first symptom of lung cancer. The tumor that forms in
the upper part of the lungs is known as Pancoast tumor which leads to severe pain in the
shoulders. The pain on the shoulders may radiate down to the arms and down to the smallest
fingers. The problem with such tumors is that it doesn’t have the typical lung cancer
symptoms and also, doesn’t show up on imaging studies.
Chest pain
The tumors that form in the center of the lungs don’t cause any pain while a type of cancer
that forms in between the outer wall of the lungs and chest wall can cause chest pain. This
type of lung cancer can cause pain in the chest, shoulders, or back area. Chest pain while
breathing is a common symptom in the early stage of cancer. Though the lungs do not have
any nerve fibers, the pleural ring of the lungs contains nerve ending. The pain may feel as if it
is emanating from the lungs. Don’t ignore chest pains or shoulder pain.
Back pain
Back pain can be caused by various reasons, but lung cancer is also a common cause. In some
back pain can be the first symptom of lung cancer. Back pain may occur due to the pressure
from the tumor formed in the lungs, irritation of the nerve roots, and spread of irritation to the
nerve and spine or adrenal metastasis. Adrenal metastasis is the spread of lung cancer to the
adrenal glands. Lung-cancer-related back pain can occur in the mid-to-upper back. The back
pain might be persistent while at rest and during activities too. The back pain may worsen at
night and with a deep breath.
Unexplained weight loss
Rapid weight loss is not a good sign in any case and is often an indication of tumor. People
affected by lung cancer may experience unexplained weight loss of 5% of body weight or
more than 10 pounds within 6 to 12 months. Cancer can cause weight loss in various ways,
which ranges from loss of appetite to alteration in the metabolism associated with the tumor.
Around 35% to 75% of people with lung cancer experience drastic weight loss before
diagnosis.
Rare Symptoms
The rare symptoms associated with lung cancer that one might pay attention to are as follows:
● Hoarseness or sore throat

● Face and neck swelling
● Fatigue
● Wheezing
● Blood clots
● Paraneoplastic syndromes
● metastases Symptoms
Bottom line
Lung cancer is considered treatable when diagnosed at an early stage, but the prognosis is
based on many other factors. Most late diagnosis is because people keep ignoring their
symptoms. So, pay attention to symptoms and consult a doctor on unusual signs.

Wearing A Floral Dress: Some Like It This Way

Posted on August 7, 2018 Author Satya Srivastava
Whether they come in pastel shades or bright pops, ladies floral dresses have a photographic genre. No season can go by without this flirty trend taking a form in one...
Lifestyle

Maintaining a healthy Nutrition diet can be much easier

Posted on June 21, 2022June 21, 2022 Author Alexander lewis
What you put in your body affects your health and lifespan. Nutrition imbalances can lead to the breakdown of our bodies. It's difficult to sort through all of the nutrition-related...
Lifestyle

Fitness geek Must do these exercises for flexibility

Posted on July 20, 2018July 20, 2018 Author mohit sona
Doing regular stretching exercises will make you steadily more elastic, flexible and mobile, and hinder you from getting physically rigid and stiff as you get older. Here are some principles...