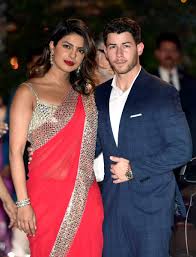 Presently, (desi girl)Priyanka Chopra recenlty coming to India in the second week of July for shooting in India with her boyfriend NickJonas, that PC is expected to shoot till mid-September and Jonas is trying to wrap up his other work commitments as early as possible to be with his ladylove. The rumoured couple took a trip to India where they spent some leisure time in India (Goa). Post their trip, Priyanka and her boyfriend Nick held hands and took off from India two days ago. Now the two seem to be enjoying another short vacay in Brazil. Nick jonas and Priyanka Chopra posted Instagram stories revealing their destinations. And as Nick performed at the VillMix Festival, the PC sure couldn’t stop drooling over his “favourite man”.

After a series of flirtatious comments on each other’s Instagram posts, the couple made their relationship official during their recent trip to India, where the two met Priyanka’s mother Madhu Chopra and family members over dinner.

Priyanka also accompanied Nick to his concert at VillaMix festival, where the American singer performed alongside a slew of acts like Shawn Mendes and Jorge & Mateu.

According to recent reports, Nick is reported to pay another visit to India along with the ‘Baywatch’ actor. A daily quoted a source stating that Priyanka will fly down to India again in the second week of July to start the shoot for ‘Bharat’. The source further added that Nick is trying to wrap up his other work commitments as early as possible to be with his ladylove.

Moreover, the reports of the two getting engaged are also making headlines. Although nor PeeCee nor Nick has went on to make any official comment, fans still can’t stop gushing over their blooming love.

Ranbir & Kaif Viral Video! Ranbir had Irritated With Katrina Name An Accent WIth Her

Posted on July 16, 2018July 19, 2018 Author Priyanka Singh Singh
Ranbir Kapoor had problem when Katrina kaif name announed with his name!!! Although today you might feel Ranbir Kapoor and Katrina Kaif are over their past but none can forget...