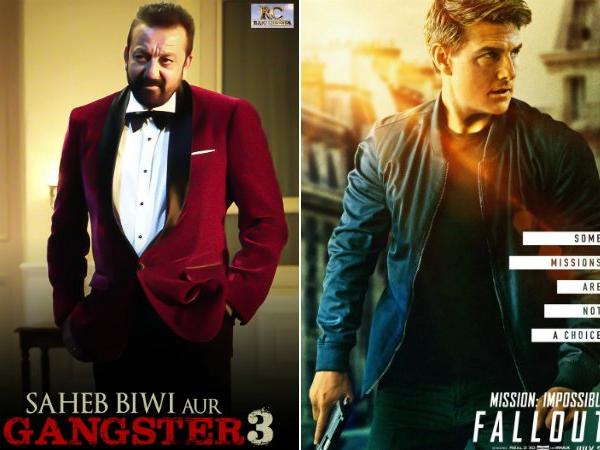 The Movies of Bollywood and Hollywood: New Movie of Sanjay Dutt that is actor of bollywood movies. Move over Bollywood clashes, now Hollywood biggies can give Hindi releases a run for their money in the traditional desi market too. This Friday will see Sanjay Dutt’s Saheb Biwi Aur Gangster going head-to-head with Tom Cruise’s Mission: Impossible-Fallout. Trade is giving both the films a fair chance and it is anybody’s guess how the weekend box office will turn out.

In the last few years, Hollywood has been giving a really tough competition to Bollywood. This tussle tilts more in favour of Hollywood if a big budget film releases with an average budget one.

In next two years, it became a trend and now most of the Hollywood films that perform well in the overseas markets also do well in India. For example, Avengers: Infinity War, Deadpool 2 and Black Panther made cinema hall owners happy in India. Avengers: Infinity War raked in more than Rs 250 crore in India. A film like Incredibles 2 that doesn’t have a vocal fan following in India has already earned more than Rs 40 crore.

As Compare these numbers with films like Soorma, Veere Di Wedding and Dhadak, and you’ll realise how Hollywood is eating into Bollywood’s pie. They are not the secondary choices anymore.

So now, it’s Saheb Biwi Aur Gangster 3’s turn to battle it out with global superstar Tom Cruise’s Mission Impossible Fallout. Film trade analyst Atul Mohan acknowledges the stiff competition. He says, “MI is a known franchise that’s the advantage, but it wasn’t a show-stealer even the last time. The buzz around this one is definitely bigger though.”

Dutt’s seems to be the biggest draw of director Tigmanhsu Dhulia’s Saheb Biwi Aur Gangster 3. Mohan says, “Saheb Biwi Aur Gangster 1 and 2 have done decent business. Now with Sanjay Dutt in the cast, it has become slightly bigger as well. He has started picking up roles as per his age. He might not be the lead, but he increases the value of an ensemble cast.”

Do You Know This Special Thing of Magaraleeshwarar Temple?

Posted on March 20, 2020March 20, 2020 Author Himani Agyani
Secret of Magaraleeshwarar Temple The Temple “Magaraleeshwarar” is a renowned Shiva temple situated on a destination called nearby Kanchipuram City in Tamil Nadu. It is one of the Paadal Petra...
Entertainment

Posted on June 30, 2018July 1, 2018 Author Priyanka Singh Singh
Sanju, a biographical movie on Bollywood’s bad boy Sanjay Dutt, is out in the theatres, and it’s the right time when you should be introduced to the main characters of...