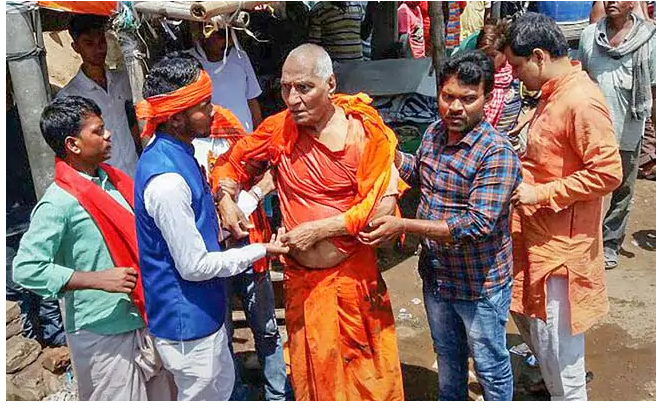 Social activist Swami Agnivesh was thrashed, punched and kicked by a mob allegedly of BJP workers in Jharkhand on Tuesday, on a day the Supreme Court said “mobocracy cannot be the new normal” and held governments responsible for preventing such attacks.

A day later, a top police officer confirmed that there have been no arrests till now, even though the attack is on camera.

In one image of the horrific attack, the 80-year-old activist is seen on the ground, his arms raised in a defensive stance against the crowd, his clothes ripped. The attackers were allegedly members of the BJP Yuva Morcha or youth workers.

“It was a lynch mob. A mob of 100-150 people attacked me. I was pushed and I fell. I was on the ground, my clothes torn…they accused me of supporting gau maas (beef). They raised slogans of Jai Sri Ram. Abused me,” Swami Agnivesh told NDTV later.

“With folded hands I kept saying – what’s the problem, what is my mistake, why are you angry, nobody listened to me.”

Swami Agnivesh has been provided security by the state government. Chief Minister Raghubar Das has asked the police to investigate the incident.

The BJP, which rules the state, has denied that the attackers were linked to the party. At the same time, a party leader said the attack shouldn’t be seen in isolation and “Swami Agnivesh’s ‘track record’ is such that the reaction doesn’t come as a surprise”.

Amid concerns over a series of mob attacks triggered by cow vigilantism and WhatsApp rumours, the Supreme Court had yesterday said that no citizen can take the law into their hands and “it is the state’s duty to ensure order and prevent mobocracy.”

Chief Justice of India Dipak Misra said: “Horrendous acts of mobocracy cannot be allowed to become a new norm and has to be curbed with iron hands.”