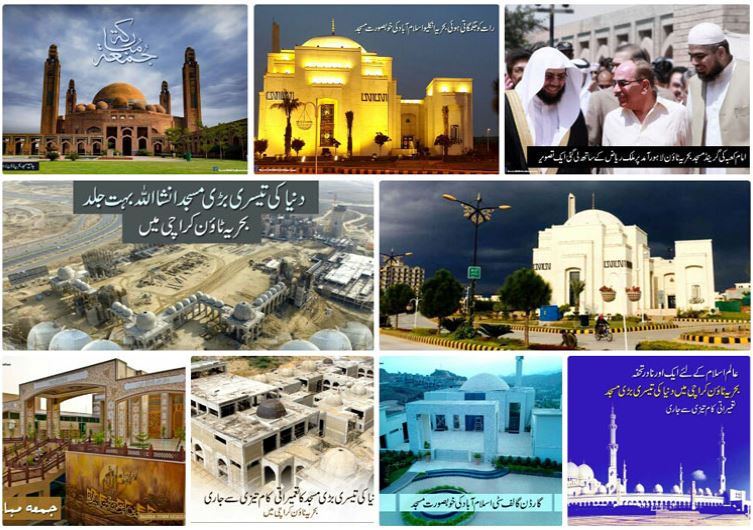 A mosque comes as one of the best places and if you talk about an act of building a mosque, it can be quoted as the most blessed and virtuous acts ever. It comes as one of the most highly commendable acts of thanking the Allah Almighty for all his blessings in the form of human lives around. Prophet Mohammad S.A.W has once said “Whosoever builds a mosque for Allah, Allah will build for him likewise in Paradise (Sahih Bukhari)” and if we look at its meaning in another narration. It states “The most beloved of places to Allah is the mosque and the most detested of places is the market place(Sahih Muslim)”

Malik Riaz who is the founder and chairman of the famous Bahria Town whilst being one of the most famous real estate developers around the globe, has done exactly that to bestow his thanks to the almighty Allah. All of his social and charitable acts truly define his character and strong desire to please the almighty Allah and bring justice to all his blessings on him since and his family ever since his childhood. It is just his motto to seek the countenance of God that has motivated him to construct great mosques all across the country.

Grand mosque in Lahore which comes as the largest mosque in country and the seventh largest mosque in the world is been constructed by Bahria Town only. It’s a rare piece of art which comes along with a stunning fusion of religion and culture. Moreover, the same mosque has been built within a short span of just 4 years with a budget of 4 Billion rupees. Moreover, the mosque can accommodate more than 95000 worshippers at a time and brings a separate area to pray for women. The mosque is further equipped with beautiful carpets from Turkey and superlative chandeliers from Iran. It also accommodates an Islamic art gallery and comes along with its own school to promote the power and love of knowledge and learning.

This is just the start for Malik riaz Bahria town as they are already in process of building another grand mosque in Karachi, which will quite surely be the third largest mosque in the world, after haram of Makkah and Medina. The mosque will be having a capacity to accommodate more than 8 Million people and further be equipped with world’s best material equipment, state of the art thermal power system, advanced air conditioning system and up to date water purification plant. It will also be bringing along an Islamic center, Islamic museum and higher Islamic education center alongside. There will be random International debate conferences which will get hosted in this grand mosque. Meanwhile, Malik Riaz is adamant to finish up the construction process of this big mosque in record time.

It’s not just about these mega mosques projects; each of the residential projects of the Bahria community is equipped with a mosque of its own. Moreover, all these societies have their Jamia mosques in order to accommodate large congregations on auspicious occasions like Ramadhan , Eid etc. all of these mosques are remarkably spacious and come along with their unique structures to reflect Malik Riaz’s passion to please god.

Galaxy gets a comeback win against FC Dallas

Posted on July 12, 2021July 12, 2021 Author Arun Kumar
Carson —The question of whether the Galaxy could compensate for Javier'Chicharito'Hernandez's absence in two consecutive games was answered early Wednesday. Hernandez wounded her calf during a warm-up for a Sunday...
News

Posted on February 21, 2019 Author Abhishek Jain
Everyone agrees that new technologies can never replace great teaching, but it certainly can facilitate the entire process. In order to make every session thought-provoking and engaging for each student,...
News