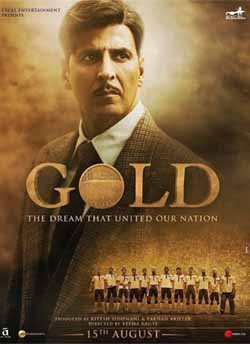 The Famous Actor Akshay next latest movie of Gold that is realesing on 15th august, 2018 this is related to India and film also stars Amit Sadh, Kunal Kapoor and Vineet Singh, and marks Mouni Roy’s feature film debut. The Gold film, is based on true events about India winning its first Olympic gold medal in hockey as a free nation, believes it is “frivolous” to compare the film with Chak De! India. Led by Shah Rukh Khan, the 2007 sports film was a fictional story about the Indian women’s national field-hockey team, which was inspired by the squad’s win at the 2002 Commonwealth Games.

Akshay kumar said in an Interview that, everything will be a competition. For me, it is all about doing a good film. Shah Rukh Chak De… was a different story, Gold is different. It is frivolous to even think like that or competing with that film. Don’t compare it, it is all different,

Reema Kagti director of Gold film, traces the journey of Tapan Das (played by Akshay) an assistant manager, who dreams to get a gold medal for the then newly-independent India.

The actor said he was initially unaware about the story of Gold but was bowled over when Kagti narrated the film.

“The Director Reema is a tough master, she handled the sports thing very well. I salute her. It is commendable. It is a tough film to handle as you are taking the audience to the time period of 1936, then 1947 and 1948, she had to do so much homework. To make a film in that era is a very difficult job,” he added.

Gold Face Off with Satyameva Jayate on 15 August

Conversation about his character, the actor said, “He is a controversial guy. He is a drunk and a cheater. But within a year, he brought 11 people together, made a team and went for Olympics, won the gold medal. I felt this story was unbelievable and needed to be told.”

Asked if the iconic event got buried in the history in the aftermath of the Partition, Akshay said “gold medal was not a priority at that time” for the country.

Posted on July 27, 2018July 27, 2018 Author Shivani Bisht
Priyanka Chopra has decided to steer out of Salman Khan’s much-anticipated film Bharat. And if sources are to be believed, it's because she has won a much bigger project. However,...
Entertainment

Posted on June 21, 2022June 21, 2022 Author cindy yang
It is no secret that crime movies are one of the most eye-catching movies in Hollywood. Perhaps this is how they balance their actions with more serious themes, such as...